Blogging has taken me places that before, seemed…well, unreachable.

I have made friends with some interesting characters.

One of these characters is THE HOOK.

Though the thought is an interesting one. I might suggest it to his wife…VampireLover.

The Hook has a blog that I can’t stay away from. You’ve Been Hooked.

On this bit of cyberspace are truly some of the funniest, saddest tales I have ever read.

You see…The Hook (Robert Hookey in real life) is a bellman and deals with humanity at its worst it seems. Some of these stories make me ashamed to be part of the human race.

Oh, but we are funny when we behave badly. Or maybe it’s just The Hook’s ability to tell the tales so that you can also see the funny side.

Luckily for you…he kept some of the juiciest stuff and put it in a book.

I can now brag I know a publisher author…and a good one !!!

I will do more on The Bellman Chronicles later…a review of the book itself.

But today I want you to meet the man himself. He’s been kind enough to supply an excerpt from the book as well. 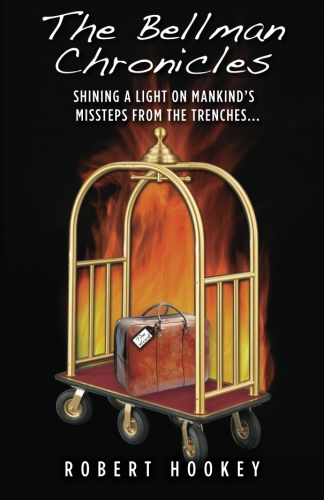 1) The Bellman Chronicles has been quite a process for you. Back in 2010 you began the blog ‘You’ve Been Hooked’ which details many incredible moments as a worker in the service industry. I know. I have been a reader of the blog for some time now. What was it, and when, that made you believe these stories could be turned in to a book?

There is a universality to  this subject matter that  I couldn’t ignore; who hasn’t been on vacation or observed people behaving badly?  And for that matter, who can’t identify with the many terrible things – like spilling your morning coffee –  that we feel happen only to us? The world may be obsessed with vampires and torrid affairs between virginal college students and psychologically damaged billionaires at the moment, but I think there’s room for stories about terrible people doing terrible things on book store shelves. At least I hope there is!

2) You’re a busy man so what is your process to write? Do you have a routine?

Yes, I pray my wife an daughter are otherwise occupied so I can sneak in some time to blog/write! Seriously though, my bellman workload is significantly reduced in the off-season, so I’ve been able to produce most of my material then. Its not easy trying to juggle family time with a full-time job and a dream of becoming a successful author, but I have a great support system in place, so that helps tremendously.

3) How did you start writing, and what books/authors do you think have influenced your style of writing?

Believe it or not, my love of writing comes from my love of comic books and the Doctor Who novels I read as a kid! As for my writing style, that springs from my family’s penchant for speaking our mind when we feel its necessary, which as it turns out, is always!

4) Do you have any other projects in the works at the moment?

My plate is pretty full right now, but the consensus among my friends, family and mentors appears to be unanimous: I need to start another book soon! I may write a how-to guide called “How To Be The Perfect Hotel Guest (Or At Least Be Treated Like One!)

5) What was the hardest part of writing this book?

Starting the darn thing! Self-motivation has never been my strong suit.

6) What is your favourite part of The Bellman Chronicles?

Ironically enough, a story entitled “Poppy vs. The Chicken!”; it perfectly displays just how my life can be both in and out of uniform! Here it is:

The plan was elegant in its simplicity; prepare supper while Jackie – his daughter – was out getting her hair done.
The Hook – the son-in-law – was writing and Sarah – the granddaughter – was busy being a kid, so he decided to step up. Unfortunately, the Fates had conspired against Poppy – the grandfather – and his task was made more difficult by the proverbial monkey wrench.
I was knee-deep in the book version of You’ve Been Hooked! and The Book Of Terrible when I heard a racket from the kitchen.
POPPY: What’s going on here? Cook, you rotten son of a bitch! What’s the matter with you?
The cooking agenda was not unfolding properly.

And so he retrieved the dish from the stove, moved the legs around a bit and tried again.
Twenty minutes pass.
Another status check yields disappointing results. Then the phone rings and one of Poppy’s friends hears this…
POPPY: No, dinner’s not done! The damn chicken legs won’t cook! I’ve never had chicken do this to me! I’m gonna throw the sons of bitches out the door!
I can just imagine the look on his female friend’s face as he hurled a series of expletives – senior style – through the phone. I tried to settle his temper, but after another status check failed to shows sign of improvement, he switched tactics. The dish was removed, the cursed legs were taken out and tossed angrily onto a shallow baking pan!
THE HOOK: We forgot to bring the legs up from the basement freezer in the morning; maybe they’re still frozen…
POPPY: They’re damn rotten things, is what they are! I’ve never had this much trouble with chicken!
THE HOOK: Well, just hang in there!
I’m real helpful in the kitchen, right? Even more time passes and Jackie finally returns home to restore order to a universe thrown into chaos by her absence – families can’t function without Mom – and what doe she say first?
JACKIE: How’s it going, Dad?
POPPY: These damn chicken legs!
I just put my head down and kept writing…
JACKIE: You’re cooking alone? Where is he? Get in here, you!
It was my turn to be grilled…

7) How do you deal with writer’s block?

I try to step back from the creative process and let the waters of inspiration start flowing on their own. A little prayer never hurts, either!

8) You have gone the self publishing route with this book. Why did you choose to do that and what strategies do you have in play to market the book?

The impenetrability of the publishing biz led me to take the self-publishing route; it feels like most publishers just don’t give a damn unless you’re writing about whatever is considered “hot” right now. The road I’ve taken is gong to be rough -to say the least – but I think it will be the most rewarding. As for marketing, I’ve been fortunate enough to be able to pick the brain of one of Canada’s most successful self-published authors, David Chilton (The Wealthy Barber, Dragon’s Den), who knows from experience just how important it is to be bold and unique. So I’m going to have to “pound the pavement”, as they say, but in a different style that screams, “I’m The Hook, this is what I have to say!”

9) What single experience has stood out for you during the writing, editing, marketing as a life defining moment?

Seeing the first digital proof was a big moment; it was the first indication of just what the finished product would look like. Other than that, holding the first proof copy of The Bellman Chronicles will always stand out as the highlight of this process. It felt like I had truly turned a corner.

10) If you could sit down to dinner with one person – dead or alive – and discuss writing with, who would that be?

Stephen King. I still can’t believe just how much work he manages to produce! Of course, I’d probably be in therapy for the rest of my life afterwards, but it would be worth it…

I suggest that you check out his blog.

You can check out more about the book itself here at: The Bellman Chronicles.

When he’s famous do you think he’ll need a good PA ???

Maybe I should delete the peeing in my pants part before I apply…what do you think ????