As I have grown older, I like to think that I have become more temperate.

I’ve said it before but – as long as you leave my kids and animals in peace, you’ll likely live. Mess with them though and I’ll rip your bloody arms off !!!!!

Seriously – I will have a go.

I think I expect less these days from others.

Counterbalancing that is perhaps a slight contradiction some would say. I think it makes perfect sense.

I will also accept less in the way of bad behaviour.

I will tolerate your foibles more readily. I have enough of my own. But you will treat me and mine with respect or I will cut you from my life like a pussing sore. As I’m on the home stretch as far as years go I no longer want to waste them of people who do not treat me respectfully. I’m having too much fun with the ones who do.

What’s your point you’re all asking.

Specifically the ones who think it is quite all right to knock on my door any time they get the urge – which is usually when I am doing something important – and tell me what I SHOULD believe.

I know an ex-JW. We spent some time discussing the religion. He was raised in the faith. Married a woman who was a minister/preacher/pastor (whatever they are called), and then began to question.

He was excommunicated. Which meant his family was told to cease any contact with him.

Great religion that is. 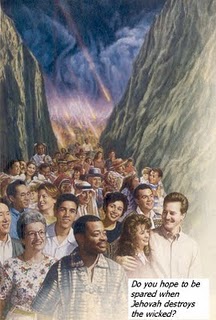 I love the way they keep changing the predicted date of the end of the world, when it fails to arrive on the last predicted date.

I’ve also met some very nice, loving JWs. But eventually they have all gotten round to espousing their beliefs as being the only way to go. I know what their religion teaches. And it is not for me.

I am at present trying to figure out EXACTLY  what I believe about the universe, religion, people. All of it really.

I tried once to give myself to God/Jesus. It was on a Christian weekend retreat. I went along because some friends of mine were going. My marriage wasn’t going well. I was searching. One person (who I had never met before – and have kept away from), was very persistent, and before I knew what was doing I was proclaiming I would take Jesus into my heart. It was that or this woman was never going to leave me alone. And I was vulnerable at the time. It didn’t progress much past that weekend.

The Christian friends who I went with are still my friends. My dear, cherished, and I trust I never do anything to lose them, friends.

I have a few Christian friends. They – to me – are what being a Christian means. They are kind. Kind is under-rated these days. They are tolerant. They tolerate me, that says it all. And with each and everyone of them I KNOW that should I need help, they are there.

They accept me – as is. Confused, searching, whatever I am. And yes – they speak of God, of Jesus, of their beliefs. We have had some lively discussions over the years. They have explained things to me.

The Bible is a BIG book. And there are a lot of confusing statements unless someone who is in the know leads you through.

Being the curious type, I like to learn – well about everything. So we have had great discussions. Usually at my instigation.

There is no pressure to join the ranks. I’m sure, believing what they do, they’d really be very happy if I became a Christian. After all, they are my friends, and they’re a bit afraid of where I may end up. But I guess they figure that it’s up to me to work it out.

What I do or do not believe is best dealt with completely separately – that will take a book or two to explain. I have done my research, well some at least.

I have two Bibles, The Koran, read what I could about Buddha, Hinduism, Mormonism, and yes I tried to check out Scientology.

I wanted to understand what makes Tom Cruise so weird. I love the guy as an actor – but he has some serious issues.

I would have had to sell the house to study Scientology. You work your way through layers I guess you’d call them of the church. But each layer – step up – costs dollars before they tell you anything. To get to the end, and then, and only then, do they reveal exactly where they think we came from, you have to fork out mega bucks.

When I want to know them.

I live not far from the local JW church. If I were to yell ‘cccccccccccccooooooooooooeeeeeeeeeeeeeee”’ from my deck, they’d hear it. And that’s the problem folks.

I am too close.

And they keep turning up like locusts (that pun was intentional). With their Bibles, and little magazines, telling me I am headed for Hell if I don’t right this minute get down and become a JW. The rest of the world has got it wrong they say.

They are sneaky too. They send out little grey haired ladies, or mothers with young kids.

I am unable to use the forceful language I would like to in these cases.

Repeatedly I have told them to ‘go to buggery’, usually in more pleasant terms and tones than that.

I request that they take note of my objection to their constant harassment – because that is exactly what it is – and stop calling here.

So they send out new ones.

JWs: “Hello, we would just like to talk to you about your relationship with God.”

Irate Me: “I have told you people not to come and knock on my door. I am not interested. I have my own beliefs.”

JWs: “I’m sorry, but I am sure I have never been here before.”

JWs: “Certainly. But perhaps I could just leave these with you?” Pushing pamphlets at me.

IM: “I’m sure. Now please don’t come back. Tell the others to not come here. Stay away. Far away.”

JWs: “Of course, sorry to trouble you.”

They are very polite.

New JWs: “Hello, we would just like to talk to you about your relationship with God.”

So I have decided to fight fire with, well, water. I am putting a bucket of it near the door, and getting the hose placed strategically should I already be outside.

The next time I hear: “Hello, we would just like to talk to you about your relationship with God.”

There will be some very wet JWs. Maybe that will quench their desire to convert me.

If not – well I will sure feel a lot happier.